Psychosis: Responding To A Loved One In The Face Of Uncertainty 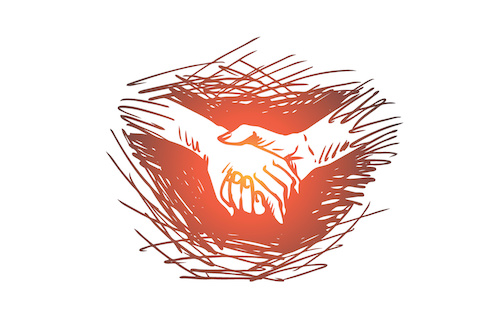 I experienced my first psychotic episode a few years ago in midlife. My paranoia began with the unshakeable belief that high-level administrators at the college where I was teaching had hacked my email accounts, seeking not only to fire me but ruin my reputation and financial credit. I was convinced these administrators were rewriting my emails to pit my colleagues against me and make it look as though I’d had an affair with a student.

Eventually, these paranoid delusions gave way to delusions of grandeur, in which I believed that a large-scale government investigation was taking place and that confirming my identity and location was somehow key to averting a terrorist attack.

As confusing and frightening as a first episode of psychosis is for the person experiencing it, it can also be overwhelming for family members who are in this unfamiliar epicenter with their loved one. A 2011 NAMI survey found that, despite having a strong desire to help, many family members or friends witnessing a loved one in the grips of psychosis feel ill-equipped to help and are unsure of where to turn.

The “first responders” to my psychosis were my husband and family. Fortunately for me, my husband recognized early on that something was amiss. Like many of the survey respondents, however, he was at a loss for what to do when he started noticing my irrational statements and unusual behaviors. Now that I am recovering, it breaks my heart to hear him and my other family members express regret over how they initially reacted to my psychosis.

Despite my husband’s belief that he wasn’t helpful during the early stages, I actually credit much of my recovery to his quick action—even in the face of uncertainty. He supported me during this time, going with me, for example, to meet with my dean about my supposedly hacked work emails. He was also understandably hesitant to leave me alone during my most vulnerable and delusional moments.

He showed incredible strength in bringing our families together. Each person in my family and his played a significant role in my recovery. I’m fortunate to have family members with medical and counseling backgrounds, and loved ones who talked and prayed with me
and encouraged me to seek the help I needed. But I acknowledge my situation is (unfortunately) the exception and not the rule.

Family members of someone experiencing psychosis often struggle just to communicate with their loved one. Determining how to respond to a loved one’s irrational statements brought on by delusions can be especially challenging. Family members can recognize that their loved one isn’t thinking clearly, but their loved one does not have the same awareness. Learning which communication strategies may be more effective in such situations can be helpful, so I’d like to share a few strategies that worked for my family and me.

Delusions Shouldn’t Be Disputed Or Reinforced

It’s common for family members to attempt to reason with their loved one, to talk the loved one “out” of their paranoia. Indeed, in the early stages, my husband and most of my family members tried this approach with me, without success. Typically,the more one tries to talk
a delusional person out of his or her delusions, the more he or she will cling to them.

When I was deep into my psychotic episode, I told my brother that the helicopters flying over our house were sent by the college to spy on me. (We live near a joint-forces military training base.) Since my brother has always known me to be a rational thinker, he encouraged me to think the situation through, asking why the military would spend such money to spy on one part-time instructor at one community college. On some level, I understood he was right: It would take more to deploy military resources.

However, rather than return to reality, my brain simply ramped up the delusions to accommodate this new information: Much higher stakes must be involved to justify such military expenditures, I “reasoned.” That’s when I became convinced that some sort of anti-terrorism investigation was underway, and I was somehow key to that investigation.

It’s not uncommon, in fact, for delusions to be somewhat “elastic,” shifting and expanding in response to newly presented information. This elasticity may occur when persons experiencing delusions are “confronted with counterfactual evidence … [in which case they] do not simply disregard the information. Rather, they may make further erroneous extrapolations and even incorporate the contradictory information into their belief.”

For this reason, disputing the rationality of a loved one’s delusions isn’t likely to have the intended outcome. But neither is playing along with their delusions. Playing along can have a different kind of unintended consequence: lending legitimacy to the delusions. For example, I remember how in the early stages of my psychotic episode, another family member once said something I interpreted as legitimizing my suspicions about college administrators.

After asking me “how far” I believed the conspiracy went, this family member told me it would be best not to reveal all of my “evidence” at once. I recall grabbing onto her word choice and feeling relieved that, finally, someone else sensed there was cause for suspicion, reason for gathering “evidence.” Going along with a loved one’s delusions— even unintentionally—can reinforce the delusional thought pattern.

Underlying Fears Should Be Validated, But Redirected

So, what are family members to do if neither talking a loved one out of his or her delusions nor going along with them is “OK?” Depending on how severe the psychotic symptoms are, one approach that may be effective is to validate the fear associated with the delusion while calmly explaining you see the situation differently. One way my sister did this was by adopting a calm demeanor, looking me in the eyes and listening to my paranoid statements without judgment. She listened without insisting on disproving my delusions, while at the same time not going so far as to legitimize them.

I recall one such interaction as I was walking around my neighborhood with my sister. I began pointing out all the houses with their blinds closed tightly and told her, “Those blinds are closed for a reason. It’s part of the investigation. The people inside are trying to make it appear as though they’re not home.”

My sister thought over what I had said, then offered, “It’s interesting you
see it that way, because I see it a little differently. I see that the sun is shining pretty intensely on those windows right now, so maybe the people have shut the blinds tightly to block out the sun.”

As I reflect on how my sister handled that situation and many others, what I appreciate most is that she remained calm and offered another way of looking at the situation without insisting it was more rational. This technique enabled me to consider other explanations without leaving me feeling as though I was being dismissed as irrational.

My sister’s approach allowed me to challenge my delusions myself, to consider that my theories weren’t the only possible explanations for what was happening around me. Of course, such a strategy may not work for everyone, particularly when symptoms are severe, but it can help someone “redirect [his or her] thoughts” when symptoms are less severe.

Recovery Should Be An Ongoing Conversation

I attribute my recovery to many factors: support from family and friends, medication and talk therapy with a trusted mental health team, and religious faith and gratitude. After coming out of my first episode, I struggled to come to terms with what had happened and what it meant for me going forward. Like many others, I experienced relapses and still do from time to time, but the relapses have been much shorter and less frightening since my therapist and I have identified triggers and developed tools to minimize my symptoms.

Each person’s recovery will take a slightly different trajectory, but even after a loved one is stabilized and no longer delusional, it’s important to continue providing support. What form that support takes depends on the needs of your loved one. In my case, it’s helpful to know my family members don’t define me by my illness, and they’re open to continued conversations about my episodes.

If I could offer one final piece of assurance to any family members of a loved one experiencing psychosis, it would be this: Please don’t be too hard on yourselves for saying or doing the “wrong things,” especially in the early stages before anyone can possibly know what the “right things” are. Psychosis is unfamiliar territory for all involved. A necessary learning curve exists. Give yourself the time, space and proper resources to get ahead of that curve.

Kim Runkle and her husband, Shelly, live in Southern California. Kim teaches Critical Thinking at a community college and is composing a memoir, Detours: Finding My Way Back from Psychosis.

This piece was originally published in the Spring 2018 issue of Advocate.